What Are Systemic Enzymes and What Do They Do?

What Are Systemic Enzymes and What Do They Do?
By: Dr. William Wong ND, PhD

The word “systemic” means body wide. Systemic enzymes are those that operate not just for digestion but throughout your body in every system and organ. But let’s take first things first, what is an enzyme?
An enzyme is a biocatalyst - something that makes something else work or work faster. Chemical reactions are generally slow things, enzymes speed them up. Without enzymes the chemical reactions that make up our life would be too slow for life as we know it. (As slow as sap running down a tree in winter). For life to manifest as we know it, enzymes are essential to speed up the reactions. We have roughly some 3000 enzymes in our bodies and that results in over 7000 enzymic reactions. Most of these enzymes are derived or created from what we think of as the protein digesting enzymes. But while digestion is an important part of what enzymes do, it's almost the absolute last function. First and foremost these body wide proteolytic (protein eating) enzymes have the following actions:
Natural Anti-Inflammatory.
They are the first line of defense against inflammation. (1,2,3). Inflammation is a reaction by the immune system to an irritation. Let’s say you have an injured right knee. The immune system sensing the irritation the knee is undergoing creates a protein chain called a Circulating Immune Complex (CIC for short), tagged specifically for that right knee. (The Nobel Prize in biology was won in 1999 by a scientist who discovered this tagging mechanism). This CIC floats down to the right knee and causes pain, redness and swelling are the classic earmarks for inflammation. This at first is a beneficial reaction; it warns us that a part of ourselves is hurt and needs attention. But, inflammation is self-perpetuating, itself creating an irritation that the body makes CIC’s to in response! 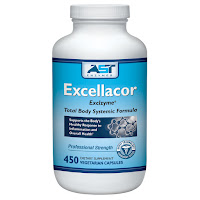 Anti Fibrosis.
Enzymes eat scar tissue and fibrosis. (7). Fibrosis is scar tissue and most doctors learn in anatomy that it is fibrosis that eventually kills us all. Let me explain. As we age, which starts at 27, we have a diminishing of the bodies’ output of enzymes. This is because we make a finite amount of enzymes in a lifetime and we use up a good deal of them by the time we are 27. At that point the body knows that if it keeps up that rate of consumption we’ll run out of enzymes and be dead by the time we reach our 40’s. (Cystic Fibrosis patients who have virtually no enzyme production to speak of, even as children usually don’t make it past their 20’s before they die of the restriction and shrinkage in the lungs from the formation of fibrosis or scar tissue).

Blood Cleansing.
The blood is not only the river of life, it is also the river through which the cells and organs dispose of their garbage and dead material. Enzymes improve circulation by eating the excess fibrin that causes blood to sometimes get as thick as catsup or yogurt, creating the perfect environment for the formation of clots. All of this material is supposed to be cleared by the liver on its "first pass", or the first time it goes through but given the sluggish and near toxic or toxic states of everyone's liver these days that seldom happens. So the sludge remains in the blood waiting for the liver to have enough free working space and enough enzymes to clean the trash out of the blood. This can take days, and in some cases, weeks! (8).
When systemic enzymes are taken, they stand ready in the blood and take the strain off of the liver by:


Immune System Modulating.
Enzymes are adaptogenic seeking to restore a steady state to the body. (9). When the immune system is running low we become susceptible to infectious disease, when it’s cranked up too high then the system creates antibodies that attack it's own tissues as are seen in the auto immune diseases of MS, Rheumatoid Arthritis, and Lupus. Here the enzymes will tone down immune function and eat away at the antibodies the immune system is making to attack its bodies own tissue.

Virus Fighting.
Viruses harm us by replicating in our bodies. To do this a virus must bond itself to the DNA in our cells through the medium of its exterior protein cell wall. Anything that disrupts that cell wall inhibits the ability of viral replication by rendering individual viruses inert. (10,11). Systemic enzymes can tell the difference between the proteins that are supposed to be in your body and those that are foreign or not supposed to be there, (again the enzyme lock and key mechanism).

One note: many in the States have learned in school that enzymes are too big a protein to be absorbed through the gut. The pioneering research done in the US by Dr. Max Wolf (MD & PhD x7) at Columbia University in the 40’s through the 70’s has not made it to the awareness of most doctors. There are currently over 200 peer reviewed research articles dealing with the absorption, utilization and therapeutic action of orally administered systemic enzymes. A search through Pub Med using the key words: serrapeptase, papain, bromelain, trypsin, chymo trypsin, nattokinase and systemic enzyme will yield some of the extensive work. Systemic enzymes now have a 4 decade plus history of widespread medical use in central Europe and Japan.